Your cart is empty.

From 2008, Opuscula Romana and Opuscula Atheniensia have been replaced by the joint periodical Opuscula. Annual of the Swedish Institutes at Athens and Rome.

For all volumes published before 2008, please contact Astrom Editions at www.astromeditions.com 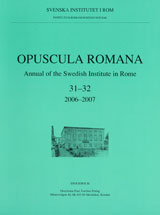